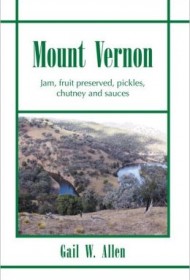 After professionally cooking for almost 38 years, Gail W. Allen decided to publish the recipes for jam and condiments that she learned at her grandfather’s knee. Allen has some intriguing ideas for flavor combinations in her cookbook, but the cookbook itself is so fraught with problems that it would be difficult for readers to use in any practical way.

The author, who is Australian, writes her recipes using only metrics, which will immediately limit her readership. (Apparently Mount Vernon is a place in Western Australia, although the author never references it in her book.)

More importantly, however, her recipe instructions are imprecise, an especially troubling issue in a collection of recipes that require careful handling (sterilizing jars, for example) and storage to avoid contamination. Although some of the recipes are clearer than others, there are many baffling entries, such as her Apple Jam, which calls for the ingredients: “Grand smith apples” and “lemon juice and seized.” The instructions say: “…stir on a hot fire until jam sets when tested. Cool a little and pour into warm sterilized jars and seal tightly. Storing in the fridge. Only make small batch as it dose [sic] keep for more than one day.”

As illustrated by the former sentence, there are so many typos, misspellings and incoherent sentences that it would be difficult to follow, let alone trust her recipes.

Clearly Allen is excited about sharing her recipes, but this cookbook is too much work for the reader to decipher. She would have been better served to put her recipes on simmer and hire a copy editor in order to make the cookbook more reader friendly.