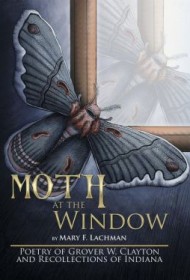 Moth at the Window: Poetry of Grover W. Clayton and Recollections of Indiana by physician Mary F. Lachman is a thoughtful, well-contextualized collection of the author’s late grandfather’s poems.

Lachman’s grandfather Grover Washington (“G.W.”) Clayton, who became a country dentist, was born in Indiana in 1884, 68 years after Indiana became the 19th state. The poems here are from Washington’s handwritten journal, rescued from an attic by Lachman, and were written between 1927 and 1959.

Lachman organized the poems by genre; sections have titles such as “Fruit of the Land,” “Chase the Piglet and Other Stories of the Road,” and “Heaven Waits.” Each section is prefaced by a brief prose piece that gives regional background information and homey family memories, such as, “The [Southern Indiana] soil is very fertile…” and “Everyone liked peaches, even my cousin Jim Harbin’s cocker spaniel. The dog would follow the peels to the composts pile and devour them.”

The poems themselves, most rhyming, are lovely and grounded in physical detail, such as “Autumn Time (1934)” in which the fourth stanza reads, “The tickle grass is blown from place to place, / And Spanish needle vies with beggar lice / To aggravate and cling to man and beast.” The repetition of the “s” sound in grass, place, Spanish, vies, lice, and beast unifies the stanza and emphasizes the solemn end of each line. The pieces embody a time in America’s past when many people lived close to the land and their direct interdependence with the seasons was taken for granted.

The book features numerous photographs of Clayton and the author’s family in what can seem like a simpler time in America; they inhabited a stoic, family-oriented, farmhouse culture that is hard to find now. Combined with the clear-eyed, attentive voice of the poems, the prose and photos create an enriching collection that many readers will appreciate.