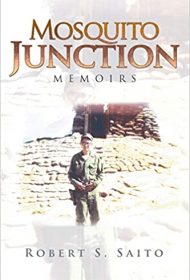 This reprint of his 2018 AuthorHouse release compiles author Robert S. Saito’s memories of his many jobs and travels into an amusing, broad-minded look back at a colorful life.

The book begins in 1955 with Saito’s military assignment to a shipyard called Mosquito Junction in Hawaii and from there describes his various postings with the U.S. Navy throughout California, Alaska, Vietnam, and aboard the U.S.S. Camden; his post-retirement jobs; a turn at art school; and travels with his wife, Naida, through Mexico, Europe, and the Middle East. Saito’s recollections are, more than anything, a list of funny stories, observations, memorable events, and meals; food is a theme, impacted later in the book by Saito’s diabetes, caused, he believes, by exposure to Agent Orange.

The charm of Saito’s garrulous voice and his persona as a hard-working, mild-mannered guy offsets the book’s lack of literary qualities. This memoir is not a process of making meaning from an experience but imparting his memories to his family.

There are points of interest for the outside reader, however. The racism Saito encounters betrays mid-century attitudes towards Japanese Americans, and his adventures afford him glimpses into realms most Americans can only read about: Hawaii before statehood; Japan after the atomic bomb; the civilian casualties of the Vietnam War—Saito is deeply affected by the starving children—and he experiences parts of Mexico, Israel, and Egypt where travelers are now wary to venture.

The horrors and highlights are all described with the same dry, stoic tone, smoothed by the perspective of distance. It’s this level tone and the reliance on telling rather than showing that may make general readers eventually weary of Saito’s reminiscences. The manifold grammatical errors make heavy going as well.

Still, Saito offers a unique perspective on worlds now vanishing from living memory, and for that alone the book has value.