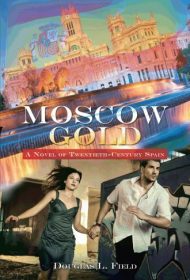 Moscow Gold is a complex historical spy novel about the legacy of the Spanish Civil War.

In 1963 Madrid, expatriate journalist David Fordham’s editor coerces him to investigate the 1936 disappearance of Spanish gold reserves. Finding allies in a Civil War veteran named Nacho and a beautiful co-worker, Ariel, he soon discovers an international plot involving German, Russian, British, Spanish, and American factions, all with competing interests in the missing gold.

David quickly realizes that some of these parties want him eliminated before he exposes the plot, and he must protect himself and his friends. Meanwhile, flashbacks to the Civil War slowly reveal how the gold was taken.

The novel captures both the beauty and dangers of life in Spain in the ‘60s, a place of lovely historic buildings—but also where police can whisk Ariel off the streets to interrogate her about David’s whereabouts and where concierges of apartment buildings might be government informants.

To survive, David learns spy craft from Nacho, including losing those tailing him and using disguises. Chapters set during the war skillfully show its chaos and destruction.

Much of the novel involves quiet investigative work: reviewing documents, locating people of interest and trying to get them to share what they know. These are intercut with exciting action scenes, such as abductions and car chases.

The novel can be hard to follow, however. The narrative contains many different characters, who appear in multiple chapters from their own viewpoints; it can be challenging to keep them straight. The story behind the gold’s disappearance, while probably realistic, feels unnecessarily complicated and takes a long time to unfold.

Additionally, the explanation at book’s end for why David, a civilian, has been drawn into this increasingly dangerous investigation feels unnecessary and lengthy.
There are also some typos, including quotation marks where there’s no dialogue.

Despite these issues, Moscow Gold might appeal to readers looking for an uncommon setting and a complex plot with international ramifications.