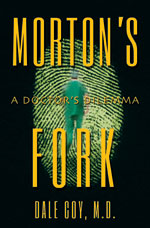 In Morton’s Fork, physician/author Dale Coy starts out by weaving plot lines that combine elements of both medical and legal thrillers. Ultimately, they wrap up as a political and social treatise on a subject close to the author’s heart.

Dr. Roger Hartley is an internist of several decades who has always practiced with the well being of his patients as his Holy Grail. He works long hours, which keep him from his family, and he ministers to all, whether they can pay or not. As Hartley tells a fellow doctor, “This hospital has been my social life for twenty years.”

So, it comes as a numbing blow when Hartley is hit with a lawsuit brought by a patient of ten years who has never paid him a dime. The doctor’s sense of himself unwinds and the injustice of the suit quickly sets Hartley on a downward spiral that takes him to a much worse place than a malpractice suit.
Concurrently, the haughtily rapacious lawyer Anita Johnson, who is suing Hartley, is having an affair with a married congressman. This politician is leading the fight against tort reform, which would limit the amount patients could receive by suing their doctor.

As the story unfolds and the medical community holds Hartley up as the ultimate victim in a downtrodden profession, Coy makes a strong argument for the need for tort reform due to the deleterious effects lawsuits have on the practice of medicine. As a work of fiction, however, the book might have benefited from more tweaking, as the author sometimes telegraphs his plot, giving readers too many clues about what’s coming next.

As partisan as he is, Coy has nonetheless written an evenly balanced look at a serious social issue and shows it from a humane and human perspective. You may not ultimately agree with the author’s social views, but it’s apparent he cares less about persuading than entertaining.