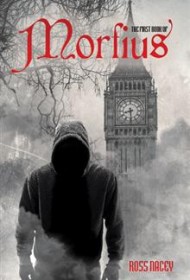 Ross Nacey’s novel, a thriller with supernatural themes, follows an Australian businessman as he learns of a conspiracy threatening the world.

Ten years ago, facing a crisis in his professional life, James Lane took up meditation and found himself developing an inner “voice of reason.” This voice slowly became manifest as a separate, conscious being: Barnaby. Now, in 2014, Barnaby has sent James an email, summoning him to London to meet in person for the first time. For in-flight reading, Barnaby has provided James the files of Jon Calder, an English shipping tycoon who died years before James was born—yet has left a letter addressed to him.

Trouble ensues when James’ old friend-turned-rival Zac Tannour attempts to sabotage James’ trip. Unbeknownst to James, Zac is a member of a sinister group known simply as “an organization” or “ANORG.” ANORG exerts a malevolent but hidden influence over world events. With assistance from former Green Beret Jack Warner, James eludes his foes and, with many stops along the way, travels to Austria. There, he learns the truth behind his connection to Jon, and meets the others with whom he is destined to fight ANORG.

Morfius begins with an inherently compelling premise: the idea of shadowy organizations battling for the future of the world. But this exciting concept falters under poor and confusing pacing. The novel frequently jumps back and forth in time with no apparent purpose, continually forcing the reader to reorient. Its many shifts in location (from Australia to England to France to Switzerland to Austria) are also whiplash-inducing. Occasional descriptive passages show Nacey’s talent for setting a scene, but unfortunately, they don’t make up for the narrative choppiness.

Ultimately, Morfius needs thoughtful polishing before it will appeal to a general audience.