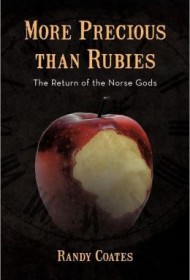 Norse mythology is reimagined with a modern twist in Randy Coates’ middle-grade novel in which 12-year-old Paul Brager witnesses the strange effect his intimidating new principal has on unsuspecting children in school.

Mr. Theisen exhibits disturbing similarities to a character in a story of Norse mythology that Paul’s dad often tells. Paul soon suspects that the principal is somehow responsible for an illness plaguing both the school and Paul’s family and must race against time to unravel the mystery of his principal’s unusual powers.

One of the book’s highlights is the author’s attempt to portray a culturally diverse Toronto public school, though the aim it isn’t altogether successful. While a few characters are given brief moments in the spotlight, including Vafa, a smart Muslim girl who engages in thoughtful religious dialogue in one scene, most of the culturally diverse characters are listed by name only and are of no importance to the story.

In addition, there’s very little action in the plot, and the most critical scenes—including the story’s climax—happen entirely offstage. The narrative sticks closely to Paul, a frustratingly impotent player who rarely takes direct action. (One exception is when he lunges at Mr. Theisen from across a desk in a fit of rage, though his outburst does little to propel the storyline forward.)

The most unsettling element is the continual awkwardness between students and teachers. Although the characters repeatedly deny that anything inappropriate has happened, readers are left with distracting anxiety after nearly every student/teacher interaction, many of which are borderline creepy. In one scene, Mr. Theisen calls Paul to his office and cryptically alludes to his past relationship with Paul’s father, making vague threats that are never explained.

In sum, with books such as Rick Riordan’s Percy Jackson series so popular in today’s YA fantasy marketplace, this story requires major revisions to reach the standards of quality, excitement, and expanded mythology that are already available in the traditional marketplace.