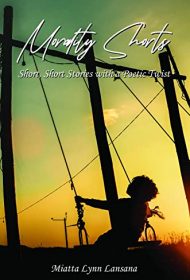 Morality Shorts: Short, Short Stories with a Poetic Twist is a compilation of 34 tales revealing a variety of life lessons and moral messages about topics ranging from spirituality and faith in God to family relationships and romantic struggles.

While the collection covers a broad range of subjects, themes are often duplicated. Several stories accentuate the lesson of the popular Harry Chapin song, Cat’s in the Cradle, about children growing up to repeat their parents’ mistakes. In “What Goes Around,” for example, a woman recognizes her younger self in her daughter’s wild behavior. Later, in “Just Like Dad,” a loving husband sees himself becoming like his abusive father.

Many of the stories have a religious slant. The woman featured in “Great But Worthless” appears to have everything going for her, yet she rejects believing in God, causing others to see her as a worthless soul. Similarly, “You Can’t Fly, But We Can” demonstrates a young girl’s need for spiritual wings to maintain altitude.

Although the stories contemplate weighty issues regarding love and faith, perseverance and patience, their conclusions often seem predictable or overly simplistic. For example, “The Pig That Wrapped Up His Own Blanket” concerns a white racist cop who accidentally beats up his own son who is in disguise to test his father’s hateful attitude. In the pat ending, the father “screamed from within his heart, ‘What have I done? How could I allow my hatred for others to cause me to hurt my own son!’”

There’s a solid moral compass at the heart of Lansana’s writing, yet it’s flaws impact its overall effectiveness, and audiences will likely find the versicular delivery diverting.