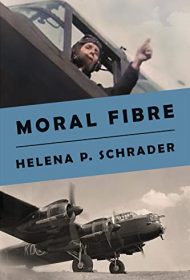 Helena P. Schrader’s Moral Fibre, a sequel to her novella Lack of Moral Fibre, immerses readers in the life of a Royal Air Force pilot during WWII’s latter stages.

Kit Moran has rejoined the RAF as a pilot (after resolving the RAF accusation that he is “Lacking Moral Fibre,” the subject of Schrader’s previous work). The novel follows the exploits of Kit’s flight crew, as well as his burgeoning love affair with Georgina, the fiancée of his late “skipper.”

With superb plotting, Schrader focuses on Kit’s character development. Schrader initially depicts Kit as a traumatized veteran, driven to rejoin the RAF out of guilt for his skipper’s death. As Kit processes this trauma, readers watch his confidence as a bomber squadron pilot and his devotion to Georgina grow.

Meanwhile, Schrader weaves in subplots concerning Georgina, his extended family (of both African and British descent), and fellow crew members. Two particularly intriguing strands involve Georgina: her experiences teaching children evacuated from London, and her relationship with Kit’s mother, who is of Zulu heritage. This narrative intricacy expands the novel, offering a view of life in late-war Britain and the repercussions of its colonialist history in Nigeria and South Africa.

Readers will find themselves engaged in the complexities, not only of Kit, but of the men in his bomber crew. For example, Adrian Peal, Kit’s navigator, comes from the English monied class, displaying all the mannerisms of an upper-class gentleman with a private school education. Initially, this creates tension with other crew members who have little formal education and hail from impoverished families. Peale’s inner turmoil also emphasizes the struggles of RAF service members to overcome battlefield anxiety.

The story is well-grounded in historical research and buttressed by Shrader’s re-creation of actual battles, as well as an Historical Note and Glossary of RAF Terminology at novel’s end.

In all, this is an absorbing work sure to interest not only WWII buffs but anyone who enjoys historical fiction.