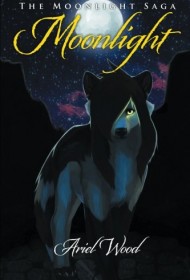 The first installment of a presumably young adult series featuring a heroic village girl who is also a werewolf is simultaneously an adventure fantasy, a romance, and a coming-of-age tale.

When Saria was five years old, she was attacked and bitten by a werewolf. A peasant living in Castle Town with her parents, she has kept her affliction a secret for years. But on her 18th birthday, when the entire populace of Castle Town is forced to come together to celebrate the birthday of the snobbish Prince William (Saria and the prince are the same age and share the same birthday), the prince is attacked and abducted by a dragon.

Amidst the chaos, Saria—understanding instantly that her supernatural abilities can be advantageous—vows that she can bring him back. Thus begins a highly dangerous (albeit conventional) quest in which Saria travels through the realms of supernatural races—such as dwarves and elves—and meets numerous supernatural creatures and beings that end up befriending her and helping her complete her mission.

Although the narrative flows well and is undeniably readable, the storyline includes numerous, uninspired fantasy clichés, such as a prophecy concerning a Chosen One. (“From your first breath you were chosen. From before even that. The entire world was waiting for you to arrive, even if it didn’t know it.”) Additionally, the realm is inhabited by stock supernatural creatures—elves, dwarves, unicorns, dragons, faeries, etc.—and much of the storyline is predictable. Another disappointment is the hard-to-believe—and monotonous—love/hate relationship between Saria and William, which is stagnant for much of the novel.

That said, young adult readers, particularly female fantasy fans, will find the character of Saria intriguing—and full of potential that will hopefully be explored in future installments.