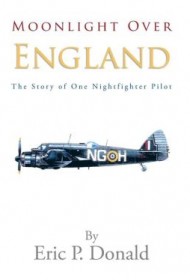 For decades, author Eric Donald has set about trying to solve a 70-year-old mystery: the death of his brother.

Norman Donald was a Royal Air Force pilot who was killed in a training crash in October, 1943. The family never got a full explanation of the crash – which has been attributable more than anything to the fog of war, it seems. Donald has sought answers, and closure, for decades.

The result of his efforts is Moonlight Over England: The Story of One Nightfighter Pilot.

Donald has been unable to get a definitive answer as to what caused Norman’s Albemarle aircraft to go down. In his search, he collected a vast amount of material related to his brother, who was 13 years his senior. It is presented here not in narrative form, but almost as a family scrapbook.

The reader gets family history, photos and seemingly unrelated maps and photos. Material is often not placed in context. Some of the inclusions appear to be reproduced from other publications. Visual items are sometimes captioned, but more often than not, the captions act more as labels and don’t tell us how this particular map, aircraft or tram – the author devotes several pages to photos of trams and summaries of their routes – fits into the narrative.

Another problem is the book’s format. Some pages are presented in a vertical layout, others are horizontal (again, not unlike a scrapbook might look). The reader is forced to constantly reposition the book to read it.

As a family history, the book is a treasure. There’s a family tree, an extensive summary of Norman’s life (his report cards, military flight logs, day-by-day diaries from 1935 and 1938 and letters home during the war are reproduced), and a wonderful collection of photos. But for general readers not immersed in World War II history, that likely won’t be enough to retain interest.