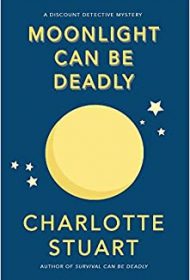 Charlotte Stuart hits all the cozy mystery marks with a well-balanced blend of quirky characters, odd twists, and lively writing—adding a dollop of droll political commentary for added flavor.

Cameron Chandler likes her job as a detective for Penny-wise Investigations: Discount Detective Agency; she enjoys her co-workers, including her glamorous boss P.W. and her trivia-spouting colleague, Yuri. That’s why it stings when a dead body turns up at a stakeout where she and Yuri are supposed to be protecting young Tilly, who has volunteered to play the role of sacrificial victim in a ritual held by the Full Moon Society. When Tilly goes missing after the ritual, Cameron and Yuri don’t look too competent.

Their quest to find Tilly, and the murderer, leads them to the Green Women society, a group of militant eco-feminists whose tactics for battling climate change involve a dramatic public protest that lands Cameron in jail. With the help of her colleagues and family—two clever almost-teens and a nurturing mother—Cameron must clear her name, protect Tilly, and stop a killer, all while trying to find out what the Full Moon Society and the Green Women, are really up to.

Stuart’s pacing and prose suit the genre perfectly, moving with speed and zest. The secondary characters have distinct quirks but remain on the safe side of typecasting. With a lot of coffee, humorous patter, and running moon metaphors, Stuart keeps the tone light and engaging while dealing with the sobering topics of mental illness, climate catastrophe, and dating as a single mother.

The members of The Green Women aren’t quite as developed as Cameron’s supporting cast, but there are enough twists to the action and an engaging rhythm to the dialogue to keep readers from feeling any lack.

Overall, Stuart delivers compelling and satisfying entertainment that still feels firmly rooted in the challenges of the modern world.