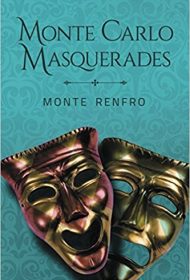 Mysteries, when executed well, can entice readers to cheat — that is, skip to the story’s end to see who’s guilty. The surprising resolution in Monte Carlo Masquerades makes it well worth resisting that temptation.

The narrative, set in Monte Carlo, spans eight days in March 1914 before the outbreak of WWI. The suspicious death of Joseph Murphy, an American shipping magnate of Irish descent, sets the stage. The local police have ruled that his demise was the accidental result of an allergic reaction to a bee sting—even though he was also shot and a glass on his nightstand contained arsenic.

Lilly Turner is acting as personal secretary to Murphy’s wife while waiting for her private detective career to launch, and Mrs. Murphy assigns her to help Ted Wycliffe, Mrs. Murphy’s cousin, investigate the murder. Paul Newcastle, a hotel/casino employee is also directed to assist. Despite Wycliffe’s boasts about his former stint as a Pinkerton detective, he doesn’t inspire much confidence.

A few obvious suspects emerge early, including Mrs. Murphy. She’s depicted as selfish, demanding and insensitive, and what’s more, she’s indifferent to the loss of her husband. A mistress, a Russian arms dealer, German soldiers and other unsavory characters also arouse suspicions.

Initially, an abundance of characters, many with backstories, slows the novel; a judicious trim would improve the pace. Nonetheless, readers will find great rewards here. Lilly and Newcastle are intelligent, appealing and flawed characters. Although thrown together to help solve the case, they have different approaches to reaching its resolution. The development of their characters and relationship propels the storyline. Credible dialogue and skilled descriptions of both the ornate and less savory sides of Monte Carlo also contribute to the book’s overall appeal.

Eventually, the intrigue gains momentum and readers become enmeshed in the task of figuring out whodunit. As they race to the surprise ending, which alone makes the book worthwhile, readers will find themselves utterly immersed in this entertaining story.