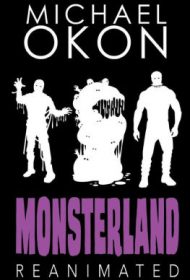 Blending elements of apocalyptic fiction, horror, science fiction, and fantasy, Okon’s sequel to 2017’s Monsterland continues the audacious tale set in a world gone mad after a plague decimates humankind and monsters from various theme parks around the world escape to wreak havoc.

Set largely around the small town of Copper Valley, California—the site of the North American Monsterland, one of seven parks worldwide that featured real live vampires, werewolves, and zombies, until they escaped—the story revolves around a group of teenagers who, after surviving the deadly theme park catastrophe, set out to get answers.

Discovering that the government has collapsed, young Wyatt Baldwin and a group of friends set out for the next town to get news of the outside world. But their journey quickly becomes perilous: Not only has a large part of humanity devolved into lawless gangs, but a nomadic blob of purplish slime is mysteriously eviscerating every living thing in its path. Add to that roving zombies, packs of werewolves, an army of mummies, and a megalomaniac’s grand-scale conspiracy to recreate the entire world and you’ve got yourself a highly entertaining read.

The well-developed cast of characters is an obvious strength; all are involved on their own respective journeys of self-discovery, even characters perceived as evil. Equally appealing is the extended homage to classic monster movies throughout. Readers will quickly find themselves immersed in the page-turning story.

A sense of wonder reflected in stories like Charlie and the Chocolate Factory coupled with the nonstop action of Mad Max and the existential horror of The Walking Dead makes this a delightfully creepy read. Monster aficionados young and old will love this series.