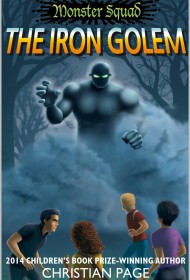 Monster Squad by Christian Page is a young adult novel bursting with re-imagined yet familiar literary characters, outrageously exciting action, and witty dialogue between a band of middle schoolers with emerging super powers and the mysterious scientists who started all the trouble in the first place.

The tale begins, as all good alien stories do, in Roswell, NM, in 1938. When a group of scientists discover the wreckage of an Unidentified Flying Object, their lives—and DNA—are changed forever.

Fast forward several generations to Autumn’s Hallow Junior High, where a group of preteens are starting to notice some inexplicable changes in their bodies. Blaine accidentally scrubs her hands so well she can see through them. Dash has bursts of speed and strength that verge on animalistic. And Shelley’s acutely scientific brain is certain the “dirt” she’s examining is actually some kind of microscopic, insect-like machine. There’s also the issue of the three robotic bullies from Grimm Academy, and a mysterious monster prowling through the forest. Before long, the events set in motion in 1938 ensure that the lives of these modern seventh grade “heirs” will never be simple or boring again.

Breathless pacing and snappy dialogue keep Monster Squad fresh and compelling. While the characters read much older than seventh graders, the narrative maintains a charming innocence while simultaneously offering excitement, intrigue, and a whole slew of newly-spun classic characters, including Frankenstein and his monster. The author makes some stylistic choices, such as using ‘thru’ instead of ‘through,’ that unfortunately seem amateur, and the multiple point-of-view structure can get a little muddled at times. But overall, fans of the Percy Jackson series, Neil Gaiman, and The Mysterious Benedict Society will find this a delightful adventure.