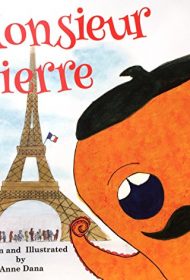 Monsieur Pierre is the story of a French octopus who, while up for any adventure, really just wants to find friends. The narrator’s voice and illustrations evoke some beloved 1970s picture books, including The Giant Jam Sandwich and Duffy and the Devil, and charmingly coax readers into the story.

As a child, Monsieur Pierre was taken from his home and dropped into a Parisian fountain. Although he encounters many tourists, no one stops to talk with him. One day, he decides to follow a group of people who go to a café, the Eiffel Tower, Notre Dame and other landmarks around Paris. When he returns to his fountain, he overhears two children discussing what souvenir they should take home. Monsieur Pierre offers himself and explains that he really wants a friend. The children take him to California, where they become fast friends and have many adventures.

The illustrations are the most memorable aspect of this book: The use of space is dynamic and engaging, and the colorful, retro-style images are evocative. The story itself makes travel and new experiences seem approachable and exciting while illustrating attractions in Paris and Northern California in a way that children can relate to.

The plot, however, would benefit from more cohesion: Monsieur Pierre becomes so caught up in exploring Paris that his goal of finding friends doesn’t come through as clearly as it should. Encountering the two children at the fountain doesn’t carry the emotional payoff it could have if they had been exploring alongside him throughout the story. The section set it California feels longer than necessary, dragging out the resolution.

Despite these flaws, this is an adventurous, engaging and delightfully illustrated story. It would be a good choice for children who are afraid to try new things or who are intrigued by the idea of travel.