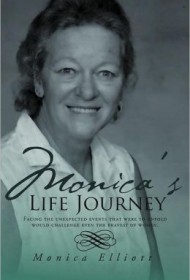 At first, author Monica Elliott’s memoir, Monica’s Life Journey, seems like a loose collection of diary entries. But by the end of the book, Elliott has pulled readers into her tribe with a welcoming narrative that makes them feel as if they are reading letters from a friend or family member.

Elliott was adopted from a Canadian orphanage and brought to live in New Hampshire with a large family. She dropped out of high school to work, married young and was widowed at 20 while pregnant with a second child. She remarried, and the family grew; their comings and goings between New Hampshire and Florida, where Elliott and her husband lived part-time in a mobile home park, make up the bulk of the story.

Elliott is living with Parkinson’s disease and wrote this book to share her story with family; the memoir is told in short episodes that jump around a bit, but she finds engaging anecdotes to share. When her hearing-impaired daughter gets married, for example, the newlyweds come back to the house before leaving on their honeymoon to “[Rip] out the sign on our street, [sic] just before you got to our house that read ‘Deaf Child, drive slow.’” Stories of the storm that flooded a mobile home park she and her husband owned and lived in are hair-raising and well captured, and the numerous mechanical breakdowns they suffer while on the road RVing fall somewhere between tragedy and comedy.

There are a few spelling and punctuation errors, but they don’t impede the flow of the writing. Anecdotes listing all the people the couple sees on various trips could be streamlined a bit for readers outside the family. But this is a great taste of America after World War II, when losing one job just meant finding another for a fresh start. It’s a beautiful gift for Elliott’s family, but has appeal for readers outside the circle as well.