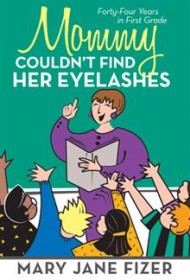 Mary Jane Fizer taught for almost half a century, and spent 44 years molding the minds of first graders—or were they molding her instead? Mommy Couldn’t Find Her Eyelashes collects some of Fizer’s favorite moments of kiddie wisdom, gleaned from her long career.

Much of the humor in these anecdotes and direct quotes from students derives from the special way with which the kids view the world from their limited perspective. An itchy scalp is “head lights.” When tasked with explaining how to cook a turkey, most of Fizer’s first graders think it takes ten to 20 minutes (though one enterprising young chef suggests the turkey can be done in three minutes by cramming it into the microwave). They clearly adore their teacher but don’t hesitate to call her an “old lady,” even while writing her fan mail over summer break.

Fizer has seen many changes in education, from prayer being discontinued in public schools to the racial integration of classrooms. Through the changes, the kids she taught appear to be constant in their curiosity, humor, and occasional willingness to bribe her (unsuccessfully) for the answers to particularly hard problems. Fizer had her first graders make time capsules to open when they graduated from high school, and many of her kids took the time to write her when that day came with appreciative thoughts about such a creative project.

Mommy is a quick and funny read. Teachers will no doubt be reminded of their own students, as many of the themes here are universal, and parents of young kids may enjoy the humor and heart on display, too. Fizer has put together a nice collection of memories that speak to her dedication to the job and love for her students.