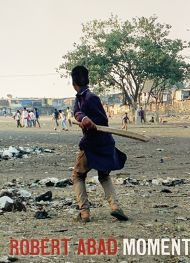 Being open to the magic in ordinary moments is a skill the young are naturally imbued with, and a value reflected in Robert Abad’s photography book MOMENT.

At first glance, viewers might mistake this collection of images for a travelogue. But that assumption is quickly dispelled via an eloquent question-and-answer section with Abad’s teen daughters, Ariella and Sofia. “None of these photos were taken with professional equipment or staged. What you see is a reflection of real life and it’s spontaneous,” explains Ariella. “This is different from the photos you see in travel guides or on the internet where people show you the extremes to grab the attention of tourists or push stereotypes.”

The snapshots Abad includes present a perspective grounded in realism from his visits to developing countries around the globe. He captures infants, kids, adults and families in countries throughout Africa, Asia, Eastern Europe, Latin America and the Middle East amid their daily routines—sitting on porches, waiting for mass transit, shopping at markets—without pretense or false commentary.

Some of the candid photos are more than 10 years old, such as an aerial view of adolescents scattered across a soccer field in Bangkok, Thailand, taken in 2007. Other shots, such as one of two young people practicing basketball in Dubrovnik, Croatia, were taken as recently as 2019.

A few of the photos make a strong point on their own, such as one of boys practicing cricket on a trash- and rock-strewn open field in Mumbai. Others are less remarkable. Many could use a sharper focus. Taken as a whole, though, the effect is intriguing, as the photographs reflect a world that is huge and intimate at the same time.

The book could use descriptive captions for each photograph, as well as a clarifying statement about why the author chose the proverbs and quotes interspersed throughout each section.

Nonetheless, it’s a colorful, edifying, international tour of many cultures, suitable for all ages.