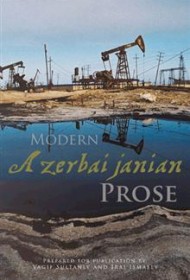 Most Westerners know little about culturally diverse, geopolitically important Azerbaijan. This English-language anthology of “Azeri” short stories and novellas – all written since 1980 – provides a wealth of insight into that volatile, oil-rich nation on the Caspian Sea, now a key regional ally of the United States and Israel in their confrontation with Iran.

That is not to say that the book doesn’t have its challenges. The collection’s two editors and many of the translators grappling with 30 of their countrymen’s work don’t write English well, so the stories can be taxing. Sample: “Teacher Nasir … was a teacher in the farther mountain village that never missed fog and missed over it for forty years.” Vagif Sultanly’s eight-page introduction is a confusing, inadequate overview of the former Soviet republic’s history and literary traditions. It never mentions, for example, that this was the first Muslim country to grant equal rights to women and ignores its long blood feud with neighboring Armenia. Instead, the piece is crammed with head-scratchers like this: “Besides, the creation of the enough famous representatives of the Azerbaijani prose is preferential.”

Still, from the linguistic murk emerge vivid glimpses of the Azeris’ mystical bent, social realities and political frictions. In Safar Alysharly’s “Owl, Swallow, and Falcon,” a brave patriot gives his life in the battle against Soviet occupiers. “Yellow Bride,” written by “Elchin” (nom de plume of the country’s deputy prime minister), envisions the fear-laced thrill an American housemaid feels when an Azeri flute (called a balaban) begins playing itself in a swank Manhattan condo.

By most accounts, the 800-year-old Azerbaijani writing culture reached its peak in the 18th century and nadir during the repressive Soviet era. Once the country regained independence in 1991, a reflowering came, which this imperfect but fascinating volume joyfully chronicles. To read it is to visit an entirely new world.