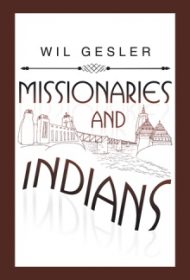 Perceptions of missionary life vary, from the violent and dangerous to the mundane and pious. In his novel, Missionaries and Indians, Wil Gesler, who spent his early years in a missionary community in India, attempts to portray a realistic picture of life there in the 1940’s and 1950’s.

Gesler’s story is narrated by teenaged Ben who, back at the missionary compound from Indian boarding school, likes to sit by the river to daydream. This sets the book’s pattern as it evolves into Ben’s stream-of-consciousness musing about Hindu mythology, monsoons, other natural events and quotes from literature. Even major events such as the killing of a sacred monkey, group picnics, illnesses or discussions of teachers stray far afield or end in lectures.

Ultimately, the story resembles a series of extended vignettes, many that show divergent approaches to missionary life. Some of the men try to convert the Indians and help improve their lives with sanitation and building projects; others, writes the author, “had the ability to set brother against brother, child against parent in a mad dash to save souls.” For many, Indian converts resembled sales figures with numbers having the sole value.

This is rich territory, but unfortunately, the book’s tone and style are foreshadowed in the book’s introduction, which is long and wordy, belaboring perceived views of missionaries while introducing the book’s many characters. With the exception of Ben’s parents, readers rarely glimpse real personalities. Instead of showing characters interacting, Ben tells us about them. And while Gesler includes anecdotes about Indian weather, customs and brief glimpses into life with the Raj, these are often in the form of lectures, rather than action. The book would be greatly enhanced by more Indian local color.

Overall, this book lacks both plot development and momentum and, more importantly, a main focus for its story. The long-winded, over-written chapters result in a narrative that fails to hold reader interest throughout.