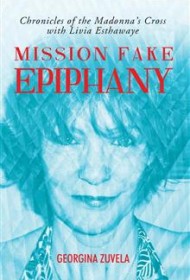 In this novel of suspense and intrigue, the narrator recounts a story told to her by her friend, Rosalyn Shaye, who, in 1976, found herself caught up in a dangerous plot in the city of Zagreb.

The story begins as then-Yugoslavia is on the cusp of a financial crisis and “dubious locals” anticipate “future winnings” on the black market. On a snowy evening, Rosalyn Shaye slips and slides her way to the local café, where she expects to meet her British agent boyfriend, Paul Xavier. But Paul is a no-show, having fallen victim to a plan by local gangsters to intercept a “priceless” shipment of incoming cargo. Soon, Rosalyn, Paul and a cast of others are involved in efforts to thwart the gangsters and save their own lives.

And so the story of heroes and villains begins to unravel, complete with James Bond-like action, and compounded, of course, by the bad guy often masquerading as the good.  A bronze statue of St. King Lancelot I that is being shipped to Zagreb is also at stake and in danger of being lost.

This is an action-packed story with all the attendant near-misses and misadventures necessary for the genre. It is well-written, for the most part, but with occasional missteps. For example, the author uses “passed” instead of “past,” and over-employs adverbs, as in: “she yelled at him viciously.” And while the characters are frequently placed in dangerous situations, the tone fails to convey a true sense of risk, instead creating a sense of bumbling bandits and invincible good guys.

Nonetheless, Mission Fake Epiphany delivers likable characters, is fast moving, and features original scenes, including a daring climb to a hot air balloon. The story is likely to be enjoyed by suspense and adventure fans, and also by those who appreciate a foreign setting with a dash of history thrown in for good measure.