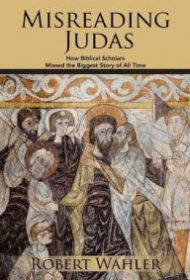 Is it possible that orthodox Christianity is based on a lie? For Robert Wahler, the answer is an unequivocal yes, an argument he pursues in his new book.

The evidence for this radical idea, the author notes, can be found in the Gospel of Judas. This recently rediscovered manuscript paints Judas, not as a betrayer, but as an heroic figure who carried out Jesus’s orders that helped set in motion Christ’s death and resurrection.

Wahler believes there’s even more to this story: that this text needs to be read, not in light of modern Christian scholarship, but through the lens of Gnosticism (in which it was written) with a focus on Western and Eastern mysticism traditions. The author argues that the obscure manuscript provides evidence of bait and switch, namely that Judas was a stand-in, or alias, for James the Just, whom the author believes is the true successor of Christ (which undermines St. Paul’s role in the development of the Church). Moreover, the text reveals hidden truths about the metaphysical nature of sacrifice and inner work that needs to be done to reach higher levels of consciousness.

This is all heady stuff, and for those not well versed in Gnostic thought, the author’s exegesis of the text can be challenging. Yet, Wahler makes a valiant attempt to unpack the text, acting like a semiotics detective, exploring symbolism, and sometimes offering line-by-line commentary of ancient texts.

In his exuberance, however, Wahler’s prose can turn dense and awkward, making his meaning hard to discern (e.g. : “The disciples ask that they be granted not to be tempted at 4:30, the same as Jesus tells them to ‘watch and pray that you enter not into temptation.’”).

As Wahler admits here, most scholars will balk at his claims. Still, the author’s ideas are well-argued with citations, and while Misreading Judas sits outside the mainstream, it does provide an thought-provoking, if challenging, alternative look at Christianity.