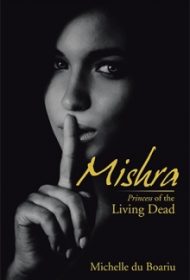 In this supernatural fantasy by Romanian author Michelle du Boariu, 22-year-old Mishra discovers her shocking true identity in a plot involving a conflict between vampires and werewolves.

The story starts slowly and meanders for nearly 100 pages, describing Mishra as a smelly skunk and hairy monkey in need of full body waxing, before focusing on essential story elements. Divided into only three lengthy chapters, it is greatly hampered by its prose, which is written in broken English that often makes the text incomprehensible.

The first chapter introduces Mishra as a lonely virgin with a talking diary. Her simple life changes after a complete makeover when she, her older sister, and friends embark on an evening that turns dangerous. The second chapter seems to focus mostly on Mishra learning more about her missing father, Vlad the King of the Living Dead, and discovering that her sister has magical powers. In the final chapter, werewolves kidnap Mishra, and she develops romantic feelings for a vampire. There’s also a plot to overthrow Vlad, and a secret contained within Mishra’s talking diary.

As the plot develops and new characters are introduced, the language barrier becomes increasingly problematic. Many sentences lack a subject. This combines with grammatical, usage, spelling, and punctuation mistakes to make a difficult read. For example, these sentences are indicative of the garbled dialogue readers will find on most pages: “Quietly, not even bite no longer is heard”; “Stay quiet until you leave you in town redness will disappear.”

Unfortunately, most readers will find it hard to persevere through such error-ridden prose.  Aggressive editing would help the story conform to traditional publishing standards and streamline the content to get to the action sooner. Also, the text would be much more accessible if it were divided into multiple chapters of shorter duration.

Addressing such editorial issues is necessary before the novel (and any future installments in the planned series) can satisfy its intended market of fantasy readers.