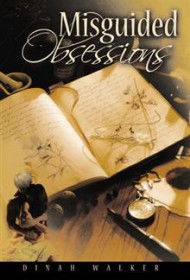 Layla Stuart is a midwife and apothecary working in Confederate field hospitals during the Civil War. She hates Yankees but is buying drugs from them to enable her work. Erik von Reichmann–”The Rake” to his peers—rescues her from an assault she blames him for. Can these two star-crossed lovers work out their differences and find happiness?

That’s the premise for Misguided Obsessions, a romance novel that shows great potential. Author Dinah Walker knows the rules of the genre and plays well by them. The cat-and-mouse relationship, some very explicit sex scenes, and even scenes in the apothecary are described with nice attention to detail. So it’s disappointing to find a good story mired in what is often unintelligible prose.

It’s not just sentences like this one: “Time dragged then flashed with spattering efficiency, he unwillingly magnetized to the garish display.” Walker over-stuffs the text with long words that are either used incorrectly or entirely made up (“gracile,” “sufflated,” “anfractuous”). They distract from the story since the meaning can’t be divined from the context of an ungrammatical sentence. The inclusion of racist language that typified the time is another distraction; even in a serious work of historical fiction the inclusion of such language is debatable. In a bodice-ripper, it’s altogether unnecessary.

Either way, for the book to succeed, it needs a comprehensive line edit and some serious polish. Walker’s story and characters are strong enough to be worth the effort.