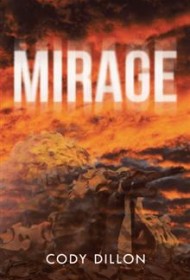 Cody Dillon’s new novel follows two assassins for a top-secret government agency who find themselves uncontrollably attracted to each other.

Sullivan “Sully” Mills joins the Marines to find a sense of belonging he couldn’t achieve in his hometown of Mirage, Arizona. From there, he is recruited into the Special Sanctions Organization, an elite force that assassinates enemies of the U.S. government. When Sully meets Zoe Millstad, a fellow SSO agent with a troubled past, physical sparks fly. Despite the quick temper and rebellious streak they share, Sully and Zoe embark on a relationship. But an unexpected event leads Zoe to a choice that will have devastating consequences for both her and Sully.

About one-third of the way through Mirage, Zoe complains that a debriefing “‘focused on [her and Sully’s] relationship more than the mission.’” The same is true of the novel. Although Dillon briefly refers to the couple’s many assignments, the reader is rarely privy to any details of the missions. On the other hand, the story covers Sully’s and Zoe’s relationship in repetitive detail. At times, the novel feels like wall-to-wall sex scenes and fights that often cover the same ground. Frequent descriptions of the characters’ meals and brand-name clothing, as well as numerous typos and word usage errors, are also distracting.

In addition, it’s difficult to understand why, given Sully’s volatile behavior, the SSO continues to retain him as an agent. Sully, Zoe and their superiors refer to Sully as the SSO’s best agent, but he seems too unstable to be an effective assassin. Dillon might have relieved some of these doubts by giving readers more opportunities to see Sully on assignment.

Although a romance between two troubled assassins is an intriguing idea, and the protagonists’ steamy chemistry is believable, Mirage is simply not well-paced or well-plotted enough to appeal to fans of either thrillers or romance stories.