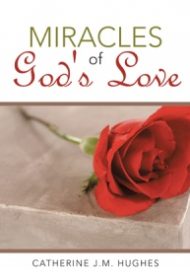 Catherine Hughes shares her supernatural encounters with Jesus Christ and the Virgin Mary in her brief memoir Miracles of God’s Love.

Orphaned at age two, Hughes battled loneliness and feelings of abandonment. She spent “hours gazing at the stars,” she writes, longing to be with her parents. During these periods of grief, she began to feel the peaceful presence of God. In a concise manner, Hughes chronicles growing up with a keen sense of Jesus and the Virgin Mary as her comforters.

At 17, after a bout of depression, Hughes attempted suicide and momentarily died. She details leaving her body, travelling to heaven through a tunnel and speaking with Jesus face-to-face. Hughes believes Jesus sent her back to life to lead others to salvation. Her tone exudes a genuine excitement over sharing her faith as she encourages readers to turn to Jesus for victory over life’s trials.

Hughes is a descriptive writer with an intriguing life story, but her quick overview of events lends the book an unfinished sense. Readers may feel as if too many questions are left unanswered regarding events such as her supposedly dead mother being alive; what led her to attempt suicide; and what happened after she woke up with a coroner’s tag on her toe. Unfortunately, Hughes abruptly drops her story in several places by including a prayer or completely shifting gears.

Adding to the sense of incompletion are many half-blank pages containing only a sentence or two explaining the use of a photo, an idea, or prayer. Hughes acknowledges that this book is just her testimony and notes that readers will find the full story in a separate book. Many will undoubtedly be disappointed and wish they had invested in the full story.

Although lacking detail, Hughes’ account of victory through Jesus Christ over loneliness and depression may resonate with readers facing similar struggles. Ultimately, this work may best serve to draw an audience to Hughes’ other book.