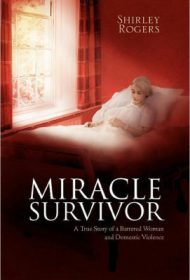 A woman plagued by domestic violence over four years in the late 1960s and early ‘70s tells her story in this straightforward memoir set in Texas.

Shirley Rogers was 36, a mother of five, and recently divorced when she met handsome, charismatic Frank Rogers at a nightclub in 1969. Although initially wary of him, she soon was drawn in and they married within a year. But before long, Shirley became a target of Frank’s violent, drunken rages and realized he was cheating on her. As two more children were born in quick succession, Frank continued womanizing and attacking Shirley, while the police did little to help.

After one severe attack sent Shirley to the ER, she filed for divorce, but Frank’s remorse won her back. Within 18 months, his abusive ways led Shirley to file divorce papers again, enraging Frank. Furious, he tracked her down with a gun, shot and nearly killed her—an act that finally landed him in a penitentiary.

The narrative is told in the third person, an odd choice for a memoir. While the author exhibits an ear for language from time to time (when Shirley tells Frank she has five kids, he replies, “That’s a bunch of curtain climbers alright”), the story is largely without flair. Progressing chronologically, it offers rather run-of-the-mill descriptions (for example, Frank is a “knowledgeable man in his late 30’s, [sic] a good looking devil, tall and angular, he must have been at least 6’2”). And most sentences are explanatory but flat. (“She [Shirley] was periodically miserable and happy, but very confused about what was happening. She hated her job more and more.”)

Overall, this memoir lacks the vivid action, dazzle, and tension of more skilled works. Nonetheless, its subject matter regarding the cycle of abuse, philandering, forgiveness, and abuse will ring true for women readers seeking a kindred soul who managed to survive her nightmare and eventually regain a satisfying life.