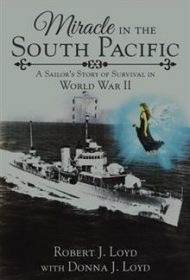 In this memoir, Robert J. Loyd, with the help of daughter-in-law Donna J. Loyd, recounts the story of his survival, with some 300 shipmates, after their naval destroyer, the USS Dewey, was mauled by Typhoon Cobra in December 1944.

The Dewey was part of the United States’ Third Fleet task force of almost 90 vessels helping fight the Japanese during WWII in the Western Pacific. Tropical Typhoon Cobra hit the ship with a terrible fierceness: Lashed to bunks or any structure to stop them from being thrown around, the men were trapped inside an air-tight compartment that was pitch black, around 100 degrees and filled knee-deep with seawater, sewage and other debris. “The deafening roar of the wind increased,” the authors write, “paralleling the intense, unrelenting pitching and crashing of the ship. Powerless, we clung to our leather straps and belts in the dark recesses of our iron ship … Everyone was praying and wailing.”

The two-day storm sent three other destroyers and 775 seamen to the ocean’s bottom, but somehow the Dewey survived, despite being severely damaged and, at one point, almost upside down.

Loyd vividly recounts the terrifying ordeal during which he and his shipmates were certain they would die. However, while this short memoir will be prized by family and friends, it might have attracted a wider audience with more prominence given to the typhoon drama. Readers have to wait until almost the final quarter before reaching the “miracle.” The rest of the book is the more routine story of a farm boy growing up in Missouri who lied about his age to join the navy at 16, his training, deployment and eventual return to civilian life in 1946, then still only 19.

While well-written in an engaging voice, the book’s title sets readers up to expect the “miracle” to be the main event. The fact that the typhoon comes so late in the tale is likely to hinder its ultimate appeal.