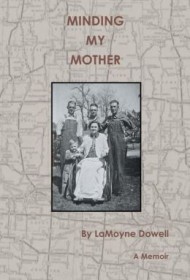 First-time author LaMoyne Dowell does more in his memoir than just chronicle a little boy’s witness to the agonizing battle his mother endures from undertreated breast cancer in the early 1940s. In a look back on his childhood in rural Missouri, he reveals a time and poverty in America so brutal that few today can fathom such hardship.

It’s not clear if that was his intent here. He describes Minding My Mother as a tribute to his mother and an examination of how her illness affected their relationship. There are a few touching moments of role reversal, such as when he assembles a pineapple upside down cake with his mother’s guidance at age 7 at her bedside. More grimly, he also recounts how he becomes in charge of injecting her with morphine.

But in truth, it’s the era’s economics – the scarcity of work for his father, the frequent moves to live with unwelcoming relatives, the lack of medical care for his mother —that take center stage most vividly.

Dowell was a very young boy during his mother’s bedridden decline. He recreates the time through the memories of others, notes his mother scribbled in her Bible and his baby book, letters, and ancient tax returns and receipts (his father’s annual income in 1943 was $840; his property tax based on assets was $1.73.)

This is not always an easy book to read. The writing is clear and events are recorded unblinkingly and without self-pity, to the author’s credit. But the potential for a much better book slips by because readers never get the full sense that a little boy is at the heart of this story. While supposedly told from a boy’s perspective, the voice still feels adult.

A richer retelling would counteract the confused child’s misery with moments of escape. Even the worst childhoods have some unexpected moments of happiness and whimsy (if only through imagination). Without that relief, the book never fully comes alive.