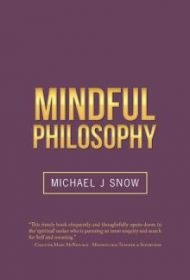 Mindful Philosophy, by Michael J. Snow, explores connections between what is popularly called “mindfulness” and the precepts of numerous religions. While the author recognizes that the idea of mindfulness has become something of a buzzword, his exploration of what he terms “non-dualism” in numerous spiritual traditions allows him to describe mindfulness, and its associated practices, with notable depth and substance.

Mindfulness is sometimes described as a way of being in the moment—of having awareness of one’s thoughts, feelings, and sensations, without being compelled toward any automatic reaction to them. Proponents commonly prescribe meditation exercises as a way of cultivating mindfulness, and often they take pains to cast these practices in a secular light, minimizing any religious heritage that might be connected to them.

Snow takes the opposite approach, aiming to show that in major religious traditions and philosophies, an emphasis is placed on understanding ourselves as one with, and not separate from a divine force (however that might be conceptualized). For Snow, it is this one-ness or “non-dualism” that is essential to mindfulness practice.

Snow casts a wide net, surveying Christianity, Platonism, Gnosticism, Islam, Sufism, Hermeticism, Hinduism, Buddhism, and Native American and Australian Aboriginal spirituality; in later chapters he delves into scientific inquiry that seems to also support his non-dualistic, non-materialist metaphysical views. The depth and breadth of Snow’s study is impressive, and his conclusions are compelling.

The audience most likely to connect with Mindful Philosophy consists of mindfulness practitioners, particularly those interested in refining their understanding. In fact, the final sections of Snow’s book capitalize on the insights from his exploration into non-dualist philosophy to offer concrete suggestions for improving one’s meditation practice.

For those interested in the growing field of mindfulness who seek to connect it to a wider tradition or enhance their understanding of its origins, Mindful Philosophy will make a valuable addition to their libraries.