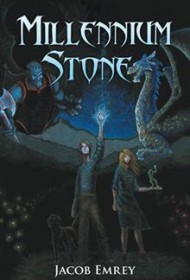 This engaging young adult fantasy features a 12-year-old boy and his dog as they embark on a daring quest.

William Locke and his dog, Spartacus are assigned by King Herodotus to travel across the land to save villagers from the mysterious darkness threatening them. An ordinary boy, William faces enormous physical and emotional challenges on his journey until he confronts the ultimate intellectual challenge: answering the secret question that will revive the power of the Millennium Stone and destroy the darkness.

William is selected for the quest because the king’s wizard, Voltaire, had a prophetic dream about the boy. Despite already suffering the defeat of his army of knights, the king sends William out alone, with only his dog and a pouch of gold. During his arduous journey, William encounters traders, con men, a good-hearted pick-pocket, a brave frog, witches, monks and others, including three evil beings sent by the darkness to destroy him.

Many of the fantastical creatures appearing here also populate other YA stories. Even so, these characters (named for famous historical figures) present themselves in unique ways. Crisp, clear writing keeps the story flowing smoothly, and attention to detail helps readers visualize scenarios: “William had to fight the urge to glance back as he ascended the crumbling stone steps, which were horribly uneven; some steps were inches apart, while others were well over a foot high. Also, the stone staircase zigzagged up the mountain rather than spiraling around it, which, for some reason, was how William had always imagined it.”

Although set long ago as reflected in the language and customs, occasional current slang unfortunately finds its way into the dialogue, such as “I have no clue” and “Do not overthink this.” The narration also refers to the hero as Will and William, rather than settling on one consistent reference.

In a book this entertaining, however, these minor flaws likely will go unnoticed by readers excitedly anticipating the next magical challenge.