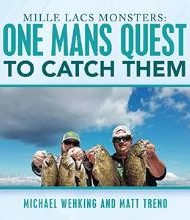 This short book is reminiscent of vintage Sports Afield and Field and Stream articles from the 1950’s and 1960’s, when “Joe and me” stories abounded. Like those tales of yesteryear, fishing guide Matt Treno “tells his stories, shares anecdotes and techniques, and celebrates his many wins and few defeats” of over 20 years of fishing in Mille Lacs.

Mille Lacs is Minnesota’s third-largest lake, covering 207 square miles. It’s famous for record-breaking bass, walleye, northern pike and muskellunge. Treno holds the state record in three of those categories. Mille Lacs fishing is regulated by the Minnesota Department of Natural Resources and the Ojibwe Nation. Unsaid in the book, but important to know, is the fact that much of the fishing on the lake is now catch-and-release, and for “keepers,” there are fish size and “bag limits.”

In six brief chapters, the book offers fishing tales and some technical information. Readers will also find a few full-color pictures of Treno holding fish almost too big to lift.

There are some charming stories here, including one about a 12-year-old boy “not totally sure yet” about fishing, who catches a northern pike, muskie and smallmouth on his trip out with his dad. Also interesting is the two-page description of a typical day in Treno’s fishing guide life.

Unfortunately, the narrative voice is disjointed. Many sections are written in first person, some apparently by co-author Michael Wehking, others by Treno. There’s no prompting to explain which is which. To add to the confusion, other sections are written in third person. Readers will find reading jarring, as they often stop to discern who is addressing them. Inconsistent capitalization of fish names is also a minor distraction.

This is a slim offering. While it has some appeal to fishing enthusiasts, it seems most likely that it will become the signed souvenir of happy anglers who engage Treno to guide them to the “monsters” of Mille Lacs, rather than the general public.

Also available in hardcover and e-book