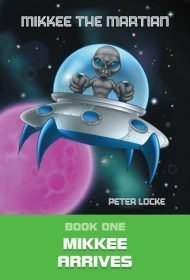 In Book One of Peter Locke’s Mikkee the Martian chapter book series, a Martian boy arrives on earth and befriends a brother and sister. Together they bring a trio of robbers to justice.

Mikkee has arrived from Mars to gain more knowledge of earthlings and enjoy a “short holiday.” He lands in a field where twins Billy and Jilly are playing and disguises himself to look like a typical boy. After introducing himself, he reveals his powers: He can change his appearance, impose his will on others, and transport himself “in the blink of an eye.” In fact, he says: “If we were huddled together…I would be able to teleport you.”

In a wonderful comical scene, Mikkee declines his new friends’ offer to stay at their house. Instead, he hypnotizes a neighboring couple into thinking he’s a visiting nephew, and they are thrilled to accommodate him.

The next day when the three kids meet again, they learn a robbery has just occurred. Mikkee rallies the twins to catch the gun-toting robbers. After he mentally tracks the criminals, they all end up in a remote area full of abandoned buildings. Young readers will love the dramatic wrap-up scene with Jilly in peril.

The premise of an affable Martian taking humans on a thrilling adventure is heavenly kid-fare, but although the pace is smoothly brisk, some scenes end too quickly. For example, Mikkee’s description of his extraordinary powers is merely one page. Because these powers are essential to the story, they deserve further elaboration. Also, the characters are underdeveloped, leaving many questions: How old are the children? Why does Billy abhor sloppiness, wearing polished shoes and formal clothes? Why doesn’t Mikkee want to meet the twins’ parents? And so on. There’s a larger, richer story here to mine.

As is, the tale falters under the weight of its flaws. If Locke could enhance the scenes and fully realize his characters, the book would have much wider appeal.