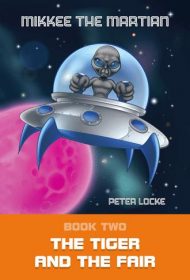 Mikkee meets his human twin friends, Jilly and Billy, to make plans for the day. After he eats his Martian breakfast of stinging nettles that he finds in a nearby field, they head to the town fair. The boys play a carnival game and go on rides while Jilly wins a goldfish at another game.

Suddenly, word spreads that a circus tiger has escaped, creating a mass exodus. Billy prepares to join the flight, but Mikkee wants to see if they can help with the tiger. Plans change abruptly when Mikkee spies the circus owner struggling to restart the Ferris wheel, which is stuck with two riders at the top. Mikkee discreetly transforms himself into a fit young man, climbs the wheel and carries them down.

After Mikkee saves the trapped couple, he, Jilly and Billy and find the “very bad tempered” tiger, which becomes docile under Mikkee’s spell, and the three return the tiger to the fair owner.

A Martian with earthling friends is always fun fodder for a chapter book. Unfortunately, this narrative suffers from several issues. There’s no background information to orient new readers; for example, how did Mikkee reach Earth and befriend the twins? How did he come to stay with a neighboring family as their nephew?

In addition, the scenes that should provide tension – the Ferris wheel rescue and tiger capture – are too brief and matter-of-factly told to provide many thrills. Readers never feel that real danger is just around the corner. American readers might also stumble over the British vernacular; for instance, a ring toss game is called a “hoopla stall.”

Considering the low wow factor and missing details, some revision of The Tiger and the Fair would greatly enhance its appeal to young readers.