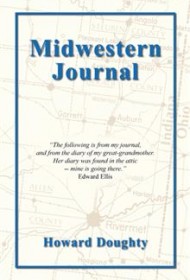 Finely evocative of time and place, this fictional journal of Edward Ellis begins with his youth in the American Midwest during the years following World War II. Each episode is prefaced by entries from Edward’s great-grandmother’s matter-of-fact diary, recording the events of a simpler age, without emotion or inflection.

At first, young Edward notes such things as rides on freight trains, barnyard mishaps and other adventures of a happy youth, together with memories of uncles, aunts and other family members, all flavored by his ancestor’s account of births, deaths, weddings and weather conditions.

As Edward ages, the journal becomes more focused on the things that will make him the man he is to become. He and a friend move to Lake Placid and the Adirondacks in upstate New York before sampling the wonders and trepidations of New York City, which finally convince them that they are, first and foremost Midwesterners and drive them back to their Indiana roots.

For Edward, that return is not the tranquil homecoming he might have expected. He falls in love, only to find himself involved not just with a new girlfriend but also with her young son and the boy’s sinister father, a dedicated and dangerous stalker. Still preceded by his great-grandmother’s notes about baking pies, putting up preserves and doing laundry two generations earlier, Edward writes about dealing with physical confrontations, disbelieving officials and pointless court cases, all while struggling to keep at least a trace of freshness to his new love.