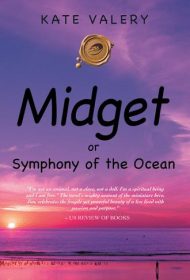 Midget tells the story of a little person struggling against incredible odds to finish his symphony and help bring down a criminal.

Jim, born into an abnormally small body and adopted at birth by Grandma Cathy, is forced by financial necessity into a group home during his 30s. Mona, the home’s owner, initiates the naïve Jim, who has little experience of life outside his grandmother’s farm, into a secret sexual relationship.

A genius composer with correspondence degrees from Julliard, Jim continues working on his symphony which reflects his love of the ocean. Along the way, he discovers Mona’s wicked nature, learns his biological parents’ identity, and falls in love with Lada, the home’s bus driver, who helps Jim bring his music to the stage and teaches him about relationships.

Kate Valery’s musical knowledge comes across strongly here, delivering moving descriptions of the effect Jim’s compositions have on people. The novel’s sex scenes, first between Jim and Mona, then between Jim and Lada, are each cleverly depicted differently. Mona’s encounters are greedy, lusty, and one-sided, while Lada’s are presented as tender, loving, and mutually enjoyable. Readers will also find suspense, as Jim and Lada discover who Jim’s parents are and slowly help others expose Mona’s appalling activities.

The dialogue, however, sometimes feels awkward, as the author often strains to express the characters’ intelligence and passions and to deliver information. This results in stilted moments, such as when Lada’s brother, responding to her list of tragedies she and her family have suffered, says: “Kiddo, you’re talking about the former Soviet Union, about the communist’s mentality. You drew a very good picture, explaining why we all emigrated from there.”

The novel drags in parts and could have been trimmed. And while the story is set in America, the narrative oddly uses meters instead of feet for distance.

Nonetheless, the narrative is generally engaging, with unusual, sympathetic characters and an inspirational message revealing the power of love and music.