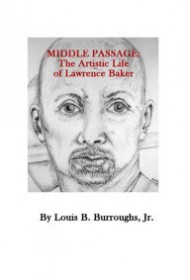 Named for the triangular Atlantic route where slaves were shipped from Africa to Western Europe and the Americas, Middle Passage by Louis B. Burroughs, Jr., blends the often-raw memories of classically trained artist Lawrence Baker with a revealing history of African American life starting in the 1700s.

As a former lone black student sitting in an all-white Kent State University art class the day the Ohio National Guard killed and injured Vietnam War protestors in 1970, Baker holds a unique perspective on the struggle to become an artist during the civil rights movement, a time when the notion that a man of color could make a living that way was considered “especially crazy.”

Burroughs deftly depicts Baker’s struggles, triumphs and street smarts with startling detail: the Jacksonville, Fla., neighborhood where teen pregnancy and welfare were the norm; the industrial stench of the city, where Confederate flags outnumbered American ones 10 to 1. Except for a slight textbook approach in the early chapters on slavery, and a final chapter that jarringly transitions from a poignant scene to a preachy monologue, the prose reads like well-written fiction, with a wonderful lyrical style that lets readers participate in each story, carefully picking berries with young Baker, for example, as he learns how to spot snakes by discerning subtle shifts in color and light, a skill he later uses as an artist and teacher.

Baker’s work has appeared in juried competitions across the U.S. and in exhibitions and permanent collections throughout Ohio. Readers will welcome the captioned photographs included here, as well as Baker’s color portraits (including those of himself) and graphite sketches of tall grasses and tangled roots. Art historians will also enjoy the section on 20th-century African American painters.

Like a canvas brought to life with rich colors and shapes, lightness and shadows, stark close-ups and muted backdrops, Middle Passage entertains and enlightens. Well written and filled with skilled storytelling, it should appeal to a wide audience.