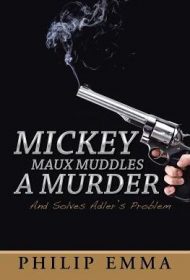 Mickey Maux (“spelled M-A-U-X, although it sounds like ‘Mouse,’” the character explains) is the star of this comedic noir crime novel.

Mickey, a retired scientist, is now an occasional P.I., hit man, inventor, and vandal who insults people and mistrusts cops. When he discovers a “dead guy” in a car, he calls his only cop friend, Detective Danny. He then finds a second dead man in another car. The first turns out to be a hair stylist and possible drug kingpin. The second is California Senator Adler’s bodyguard.

What follows is a confusing narrative, with many long, irrelevant passages. In fact, the plot almost feels unnecessary, as the story seems mostly a vehicle for extended jokes. For example, the roof of Mickey’s car is decked out with four motorized, four-foot middle fingers so he can flip off people in any direction. And self-driving “Shit-Ninnies,” his invention, randomly patrol the city to fire paintballs at bad drivers. (The frequent mention of Shit-Ninnies gets old quickly.) Additionally, Mickey’s mathematical mind dwells repeatedly on a puzzle created by Lewis Carroll, whom he calls “Louie.”

When he’s not going on about middle fingers and mathematical puzzles, Mickey looks for connections between the two slayings. His digging leads to solving Senator “Adler’s problem,” as referred to in the novel’s subtitle.

The dialogue can be puzzling (although it’s sometimes clever: “He had a dead guy working for him?” Detective Danny says. “I’ll bet he was the life of the party.”) And the author occasionally inserts footnotes to translate phrases like “Je ne sais quoi,” which seems out of place in a novel. Additionally, Mickey often repeats himself. (We’re told repeatedly that he mistrusts cops, that the first victim is dead, and how Shit-Ninnies work.)

Overall, Mickey’s hijinks and his tendency to veer off into tangents becomes tiresome and is likely to alienate many readers. Still, those who hate bad drivers (and who doesn’t?) can expect a few chuckles.