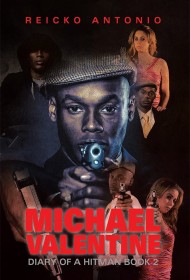 A naive Christian boy disillusioned by horrific things happening to his parents falls into a violent life with the mob in this action-filled novel. Set predominantly around Washington D.C., the book delivers heavy doses of graphic violence and porn-level sex scenes amid a story of family loyalty, money hunger and vengeance.

Michael Valentine, the novel’s narrator, opens with a brief backstory of his 1962 birth in Maryland. His father is drafted and dies in Vietnam when Michael is eight. Soon, Michael is shocked to catch the locally respected pastor having sex with his grief-stricken mother and later savagely beating her.

Enraged and disillusioned, Michael takes his anger out on the pastor. A local mob boss, impressed with Michael’s ability to kill without remorse, hires the teenager as a “private contractor” to “take out the garbage” when necessary. As Michael immerses himself in his work, developing clever and gruesome ways to kill, he is increasingly sucked in by the easy money, rich lifestyle and gratifying sex.

Bond-like action propels this novel, with Michael regularly visiting his sidekick gun supplier “Eight” for ever-increasing firepower as his hit challenges grow. The author spares no details about Michael’s murders. Here’s the fate of one gorgeous woman who talks too much: “I cut across her tongue until I’m able to rip it out. Her muffling screams are drowned out from the heavy flow of blood. . . Donny gives me his blessing, so I slice her from one side of the throat to the other.”

Among the book’s flaws are misspellings and slang anachronisms, such as “just chilling,” and “hook up.” In addition, Michael gains sophistication implausibly quickly; within months he’s able to recognize Carrera marble, Fabergé eggs and thousand-thread-count tablecloths. The ending also stretches credulity as Michael turns back to God for forgiveness.

Despite its uneven writing problems, strong language and raw visuals, Michael Valentine is fast-paced and imaginative and may appeal to those who appreciate the genre.