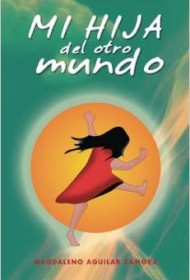 Mi hija del otro mundo is a novella told through the eyes of Cecy, a young Mexican woman who works as an accountant. When one day she and her boss receive a mail campaign to sponsor an orphan living in El Salvador, her life takes a strange turn.

They agree to make the monthly payments to sponsor a young girl named Lucerito. One day, Cecy learns that Lucerito’s orphanage was attacked by guerrillas, causing the little girl burn injuries. She decides to travel to El Salvador in order to bring Lucerito back to Mexico with her. While in search of the child, she faces several difficulties, among them being kidnapped by guerrillas. Ultimately, Cecy is released by the guerrilla group’s leader and locates Lucerito in a small town with the American family that runs the orphanage.

Along the way, Cecy becomes romantically involved with a mystical fellow named Luciano, and by the end, readers are met with an abrupt plot detail that introduces an unexpected element of magical realism: After strange things begin to happen in Cecy’s apartment, she learns that these occurrences are caused by her now legally adopted daughter, Lucerito, who is flying around because her deceased mother showed her how to soar so that she wouldn’t have to walk while her burnt feet healed.

Overall, the novella is rambling and none of the many characters are fully drawn. In addition to including grammatical errors and poor punctuation, the author uses an unorthodox dialogue style that’s distracting. Instead of enclosing the dialogue with em dashes, as is done in Spanish, the author employs parentheses such as: “Bueno Don Camilo, (le dije)…” [“Fine, Don Camilo (I told him)…”].

If, from the beginning, the author had created a more believable magical realist world, perhaps readers would have suspended disbelief and embraced this story. Because he didn’t, the resulting effect is jarring and unsatisfying. While the storyline has potential, the novel needs considerable rewriting and editing to attract a wide readership.