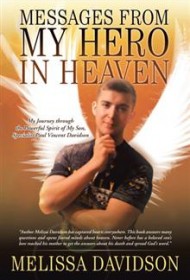 When Melissa Davidson’s 21-year-old son was murdered, she embarked on a spiritual journey of grief that resulted in visions of her son’s spirit. This has inspired her memoir, Messages From My Hero in Heaven.

In November 2014, Army Specialist Paul Vincent Davidson was just beginning sniper school when he was killed while off duty. The murder took place under suspicious circumstances that aren’t addressed in much detail in the book. His mother, a woman of deep faith, grieved his loss tremendously. Through the recounting of memories, her faith in God, and a series of visions and impressions of Paul that she calls miracles, Davidson chronicles her grief and seeks to encourage others who have lost a loved one.

This is a deeply personal, and deeply raw, work that reads more like a collection of diary entries than a highly crafted memoir. Paul Davidson’s life is retold in great detail: the author, for example, often lists the food served at a particular meal and recalls childhood moments that are likely to have little resonance for outsiders, such as young Paul insisting he frost his own cake. She also recounts several visions of her son after his death, but because these moments are so specific to Davidson, they are not likely to help those seeking comfort or understanding in their own grief.

Several times, Davidson pleads with her son’s spirit and with God to help her oldest son grieve and find his faith again. Although the narrative is often written as a letter to Paul, the book feels in many ways like a heartbreaking cry for her living son.

“Memories are the essence of our being,” Davidson writes. Despite its limitations for general readers, this book is a valiant and poignant effort by a grieving mother to keep her son’s essence alive.