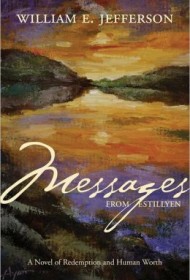 In his breakout novel of spiritual revelation, William E. Jefferson invites readers on a journey of discovery where “joy and meaning break through pain.”

Hollie and Goodwin Macbreeze, a young couple in search of refreshment and inspiration, travel to the metaphorical island of Estillyen where creative monks stage dramatic readings of biblical stories. While Hollie focuses on the readings, Goodwin has another goal: to search out the house he sketched as a boy, and possibly meet its reclusive owner, Oban Ironbout, a former friend of Goodwin’s grandfather. The unlikely and unwelcome relationship Hollie and Goodwin form with Ironbout brings him out of his years of bitterness and into the monk community and their fascinating ways with words. In the process, the couple discovers unexpected answers to their own dilemmas.

The plot is not complex, but the themes are deep. Discerning readers will be drawn into the mystery surrounding Ironbout’s tortured soul. And the readings interspersed throughout the story offer a unique presentation of the Gospel via the ongoing struggle between the forces of darkness and light, and the necessity for the solution in the “Word made flesh.”

The author’s writing is skilled, poetic, and reminiscent of the classical period. This is a book to savor, not to gulp; the pace is leisurely. The style is allegorical in part, reminiscent of John Bunyan and C.S. Lewis. The “readings” hearken to Donne and Milton as well. At times, Jefferson dwells unnecessarily on descriptions of walk-on characters, furniture arrangements, and similar minor details, and some dialogue is stilted, but these are minor flaws.

The novel will appeal to readers who appreciate British wit, the skill of a true wordsmith, and the challenge of metaphysical introspection. Christian readers will be especially delighted by the creative way the author brings the Bible to life. Jefferson stays true to the motto appearing on the back jacket: “Words matter, some more than most.” The words in Messages from Estillyen matter.