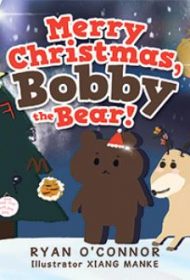 A young bear learns that differences in beliefs and backgrounds don’t need to be an obstacle to friendship, in Ryan O’Connor’s picture book Merry Christmas, Bobby the Bear!

Bobby the Bear loves to give gifts to his friends at his annual Christmas party. While gathering supplies to make ornaments as presents, he meets a new animal who has just moved to the forest: Danny the Deer. Always friendly, Bobby invites Danny to the party, but when Danny arrives, he politely declines Bobby’s gift. Bobby and his friends are shocked, but Danny explains that where he comes from, “we don’t give or receive gifts” and “We don’t even celebrate holidays or birthdays.” Instead, Danny shares an experience he enjoys, singing and dancing, and the animals all have a great time.

The book proceeds with a slow, calm pace as Bobby greets friends and makes ornaments, which sets up the sudden surprise of Danny’s reaction to his gift. While the ability of Bobby and his friends to adapt to an unexpected situation and overlook differences is inspiring, it’s undermined by Danny’s comment in the book’s final pages that “I did not know celebrating holidays could be so much fun. Maybe next year, I can try to make gifts for everyone!” Instead of letting Bobby’s message that “We are all different in our own ways, and we are all special in our own ways” stand, the ending implies that Danny will simply adopt the majority view.

The book’s art offers several strengths, such as using pictures inside word balloons to show characters communicating, or hearts instead of eyes to show the animals’ appreciation for their gifts. Unfortunately, there’s much visual repetition. Characters’ expressions and poses are replicated on multiple pages, reducing the enjoyment of otherwise appealing artwork.

Despite its flaws, Merry Christmas, Bobby the Bear! offers a gentle, enjoyable example to children of how to handle an outlook that doesn’t match their own.