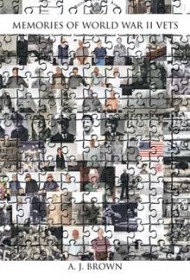 Memories of World War II Vets collects interviews with 89 servicemen and women who either volunteered or were drafted into World War II. Their perspectives are diverse and illuminating.

Editor A. J. Brown asked each participant to fill out a worksheet of boilerplate questions (first memory, first car, family pet, etc.), which she includes for an informative first look at the veteran. She follows that with an interview with each, starting every session with the question: “What were you doing and feeling when you first heard about the Pearl Harbor attack?” In many cases, that’s all she needs to ask for the memories to come pouring out.

While many vets tell of rushing to volunteer for service once the U.S. joined the war effort, it’s surprising to hear from other dissenting voices. Some were due to end their service and were forced to redeploy, to their dismay. Others went in with little respect for the armed forces, and came home with even less respect after being (in their view) treated like cannon fodder. For a large group of people in their 80’s and 90’s, it’s not surprising when there’s an occasional lapse in memory, although those who did precision work can recount the details precisely. Their pride is vivid.

Memories is both chatty and informative. The vets are generous with their recollections, and Brown includes snippets from a few whom she was unable to interview at length to ensure that their achievements are honored. The book will appeal to vets who want to compare notes with others, and although not a straight-up read, it’s likely to be enjoyed by casual readers, too, because it’s easy to pick up, leaf through and find fascinating anecdotes every time.

By presenting all points of view from veterans, the author offers an uncommonly nuanced look at the armed forces and the war. This is an evident labor of love and a valuable piece of collected history.