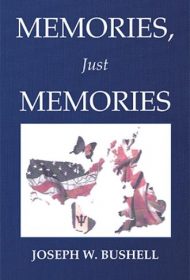 Joseph W. Bushell’s memoir is a tale of a life well lived, written in the manner of a straight-forward recording of daily activities in times gone by.

Bushnell was born in Barbados, West Indies, married, and moved to England in 1965. There, the couple raised a family (and saw the birth of their first great grandchild) before moving to America in 1993, eventually settling in Georgia.

While this sojourn is recounted in flashbacks throughout the narrative, the author’s main focus is on life after the death of his wife in 2011 and his retirement as house manager of a group home. Almost immediately, we are treated to a detailed account of his prostrate troubles, which are resolved happily. These hint at the sort of ordinary family events to come: There are birthday parties galore (for one, Bushell writes: “We met up at the Hibachi Grill for Joey’s birthday as planned”), visits with extended relations in Barbados, hospital stays of various family members, and so on.

Much of the focus is even narrower. The author discusses such things as the hardships of a retired widower in finding a date, changing a flat tire, having cooking mishaps, getting his truck serviced, and switching television service providers (“I changed over from DIRECTV to Comcast on July21. It was one hundred dollars cheaper; that made a big difference in my household budget”). In other words, readers anticipating profundity, excitement, or high drama should look elsewhere. Still, the author’s dive into his past carries some of the charms of ordinary life.

The primary audience for the book would seem to be Bushell’s descendants, eager to learn how he lived his life. And yet there may be lessons here for the rest of us, lessons about coping with the everyday and coming out, if not ahead, at least satisfied with the race that has been run and comfortable with its outcome.