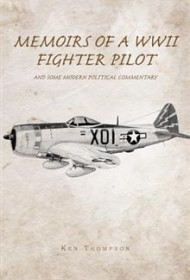 Nestled between the author’s account of an out-of-body experience he had in the fourth grade and his thoughts on such contemporary issues as immigration policy, Muslim clerics, the United Nations, labor unions, and gasoline prices, the author delivers what the title promises: the story of the pilot of a P-47 fighter-bomber during World War II. Minus the extraneous material, It’s a story that deserves to be told

Joining the Army Air Corps at the beginning of the conflict, author Ken Thompson is eventually assigned to a combat squadron in Italy and the P-47, the quirks of which he seems to have learned as much by trial and error as by instruction. The pace of the narrative quickens once he begins flying against the enemy, and the author reveals himself a crack pilot, mastering both his aircraft and the missions he flew.

He tells of nursing his plane back to base after being riddled by antiaircraft fire, of developing a unique takeoff technique from a too-short runway, of supporting the invasion of Southern France by gathering a group of scattered airplanes separated from their own units after taking off in darkness, and of guiding another pilot home whose plane had been severely damaged, while he himself was wounded by shrapnel. For this last, Thompson was awarded the Distinguished Flying Cross.

Typical of many wartime memoirs, such tales of the air war are interspersed with not-so-subtle digs at less than competent superior officers, several anecdotes of drunken flyboys, and dancing with Italian girls – anything to lighten the stress of combat.

By the end, problematic opening scenes of family discord (divorces, stepparents, violence), are forgotten and his unrelated final reflections forgiven, and the author has made a worthwhile contribution to the literature of the Second World War.