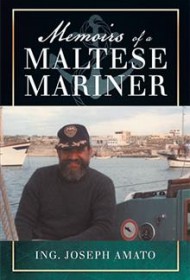 While most tales of nautical adventure take place on the bridge or foredeck of a ship, much of the drama in Joseph Amato’s memoir happens below decks in the engine room, the realm of the chief engineer who “[a]fter the Master … was like a king on board.”

Amato, a member of this royalty, was born on Malta. He began his career at a local dockyard repairing ships for the Royal Navy. After overcoming the objections of his mother, he embarks for England and a life at sea, where, armed with a British engineering certificate, he serves on ships registered in Germany, America, Russia and Libya, among other ports of call.

Once afloat, the narrative becomes a series of engaging episodes around the globe, including stories of smuggling; an electrical failure that caused an out-of-control ship to crash into a jetty, scattering a band of welcoming dignitaries; the transporting of military supplies “about which I was not intended to find out” from Russia to Libya and more. After a long career on the high seas, the author re-centers his maritime activities on Malta as a port inspector and shipyard overseer, while occasionally filling in on ship crews, delivering sailing yachts to their owners, and traversing the waters in his own ketch.

The narrative is occasionally flawed by confusing and awkward prose (“As usual for navigators [sic] it was a busy night but under a clear moonlit sky keeping a watchful eye for the oncoming traffic as the ship made headway…”) and the seemingly random use of the adverb “however.”  It is also marred by punctuation errors, run-on sentences and typos, including one sentence that simply cuts off in mid-thought.

For those who can overlook such flaws, however, the book offers a compelling portrait of a life afloat, and will appeal to those interested in the below-decks decisions necessary to keep maritime trade flowing, as well as to anyone drawn to a lively nautical yarn.