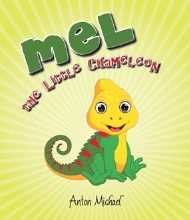 Mel the Little Chameleon features a partially colorblind chameleon who must learn to adapt in order to make it in the world.

Mel is still a young chameleon when his father takes him into the woods to learn how to find food and fend for himself. Mysteriously, they see that Mel is unable to properly change colors to match the green leaves surrounding the family’s home; instead, he takes on a brilliant red hue.

Mel’s parents take him to the clever fox for diagnosis and then to a wise old owl, who realizes that while Mel can change to yellow and blue properly, he mixes up reds and greens. To solve the problem, the owl tells Mel to change to the color red when he thinks he sees the color green, and vice versa. The moral is clear: Mel’s family helps him overcome his disability with patience and care.

The writing is clear and direct, and the brightly colored illustrations are engaging and fun, capably depicting the narrative’s ups and downs for young readers.

But the story is hampered by a few issues. First, the solution—a clean swap of color identification—seems overly simplistic for a disorder that causes color confusion. The larger narrative flaw, however, is the acute focus on the adults, who diagnose and solve the problem. Because they have all the agency, Mel seems more like a narrative device than a fully formed character, and it’s unclear if he completely understands the implications of his disability. He never tries to address it on his own, which discounts his ability to solve problems and creates a divide between him and the reader.

While well meaning, Mel the Little Chameleon is unlikely to satisfy youngsters, who will find it hard to engage in a story whose focus is on parents who have all the answers.