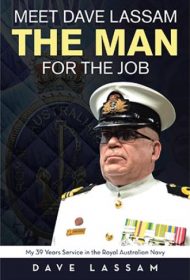 Dave Lassam’s congenial memoir covers his service in the Royal Australian Navy from his induction as a recruit medic in 1978 to his retirement as a lieutenant commander in 2016. Lassam’s focus is on the ships, bases and naval procedures as he describes his training and subsequent postings.

Some of the highlights of his service include appointments as a senior recruitment officer and a medical administration officer (MAO). As an MAO, and serving on such ships as the Kaniimbla and the Mercy, he supervised medical teams on numerous humanitarian missions, including ones to the island of Nias (post-earthquake), the Fiji island area (post-military coup), East Timor (“following a second uprising of local militias”) and, again post-earthquake, to a “town called Gunungsitoli” located south of Sumatra.

While Lassam describes some of the patients he encountered (…”as I looked down, I noticed that both his feet were gone”), he reserves most of his descriptions for the ships he was on. The Mercy, for instance, was “originally an oil tanker,” and weighed “in at seventy thousand [sic] tons.” His most arresting description is of a plane’s failure to launch on the Melbourne during an early part of his career. The pilot could not “possibly get the engine up to speed in time, so he was standing on the brakes, but the catapult…was dragging the plane forward….”

Lassam’s book gives a good sense of what it’s like to be in the Australian navy, but conveys only a minimum of the personal information expected in a memoir. He occasionally alludes to his former wife but does not even give her name. He sparingly mentions friends and his dismay at a diagnosis of PTSD and prostate cancer, but mostly, his inner life is unexplored, except when he’s “chuffed” about something. His book is also over-laden with acronyms.

Nevertheless, this cheerful account of one man’s navy is loaded with enough nautical and procedural details to make it valuable for a niche audience.